STEVE TYRELL RETURNS TO THE McCALLUM Grammy Award winning producer and vocalist Steve Tyrell is the definition of a renaissance man. In his nearly five decades in the music business, he has achieved success as a singer, songwriter, producer, music supervisor, and most recently, radio host. His breakthrough performances in Father of the Bride and […] 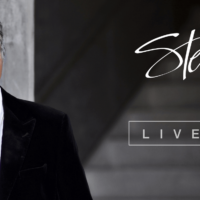 Grammy Award-winning vocalist Steve Tyrell has reinvented and re-popularized classic pop standards for a modern audience. Known for his rich voice and unique phrasings, Tyrell has been a McCallum Theatre regular for more than fifteen years. “Steve Tyrell has one of the most gratifying Cinderella stories in present day popular music. Nine albums later, Tyrell […]

Talk about late bloomers! Grammy-winning music producer Steve Tyrell didn’t record his first album till he was 50 – but he’s more than made up for it in the years since. Not only have many of his albums soared to the top five on Billboard’s jazz charts, but he’s performed concerts throughout the world. The Center favorite returns with a show that celebrates the Great American Songbook, sung with his signature contemporary flair, and honors some of the songwriting greats he’s worked with, among them Burt Bacharach.