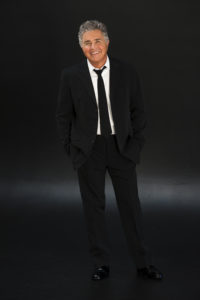 Singer, producer, and composer Steve Tyrell is a soulful, throaty crooner with a deep love of the American pop and standards tradition. Born and raised in Texas, Tyrell cut his teeth in local R&B bands in the Houston area before relocating to New York at age 18 and landing a staff position at Scepter Records. As the label’s head of A&R and promotion, Tyrell championed the classic Burt Bacharach/Hal David-composed recordings of Dionne Warwick and also recruited singer B.J. Thomas, producing his hits “Hooked on a Feeling” and “Raindrops Keep Fallin’ on My Head.” In the years to follow, Tyrell additionally made his mark as a hit songwriter, co-writing the gold-selling number one hit “How Do You Talk to an Angel” for the Heights and the Jamie Walters smash “Hold On,” as well as working on music for film (Mystic Pizza, Midnight Crossing, and The Brady Bunch Movie, among others) and television.